Surrendering and going with the flow 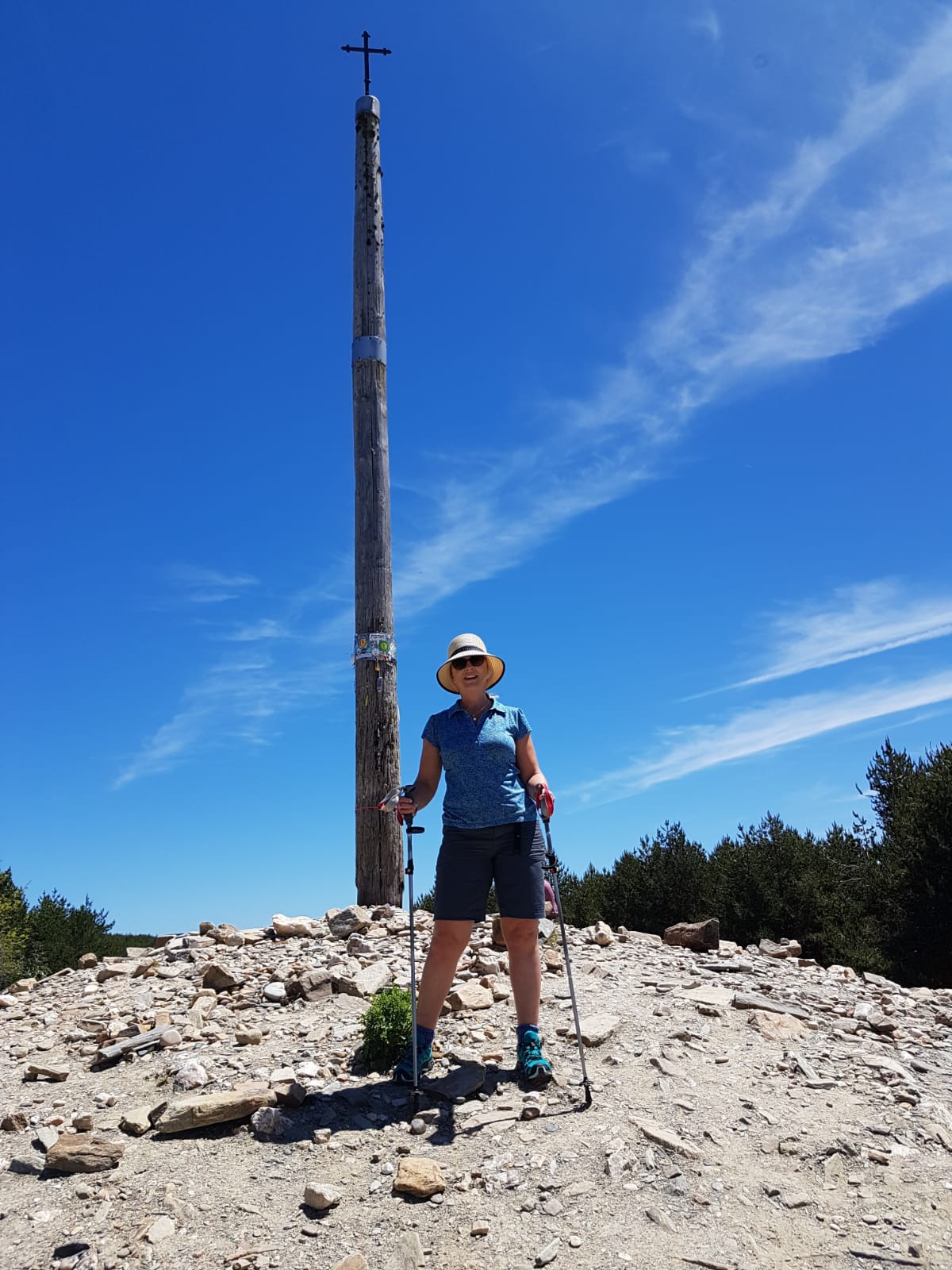 A few years ago, I read ‘The Pilgrimage’ by Paolo Coelho, which instantly planted a seed of inspiration in my mind to travel the same path. Time passed by and having only had 8 days off work for the whole of the last year, I decided that this would be the year when I took more time off work and had a holiday with a difference!  I duly made arrangements, via the local travel agent, to make my own pilgrimage (of sorts!) along The Camino de Santiago.

In June, I found myself in Leon, Spain at the start of the portion of the route I was about to walk. 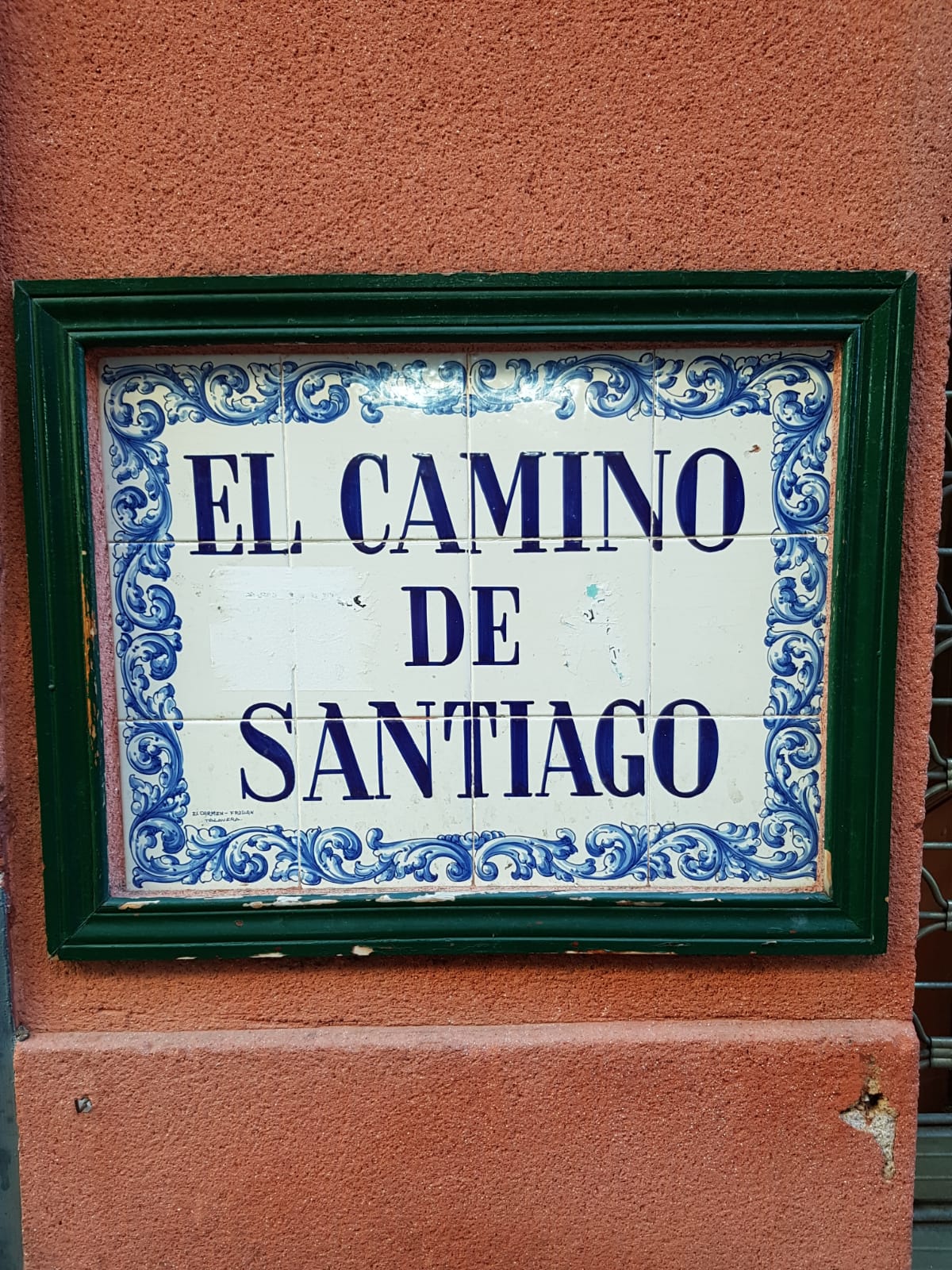 To give you a bit of background, The Camino de Santiago (the Way of St. James) is a large network of pilgrim routes leading from various points in Europe to the Cathedral in Santiago de Compostela in northwest Spain.  The cathedral claims to hold the tomb of St. James.  The pilgrimage dates back to the 9th Century.  Today, thousands of people walk (or run or cycle) the route every year for all kinds of different reasons, ranging from spiritual pilgrimages through to personal challenges, alone or in groups, in parts or in its entirety.

The most well-renowned and popular route is from St. Jean-Pied-du-Port, near Biarritz in France to Santiago.  It takes around 4 weeks to complete.

I didn’t do that route!  I started my walk from Leon in Spain.

I wanted to experience this walk for many reasons, not least to have some time to myself, to think and be alone (but not so alone that there wasn’t a soul to talk to!)  The beauty of ‘The Way’ is that you meet so many interesting people from all walks of life from around the world, who all have one thing in common.  They are walking to the same place on the same path as you are!

And that is how I thought my walk would be.  OK, so I didn’t just arrange a flight and start walking from St Jean in the Pyrenees, which is the most well-known starting point, and I didn’t stop in hostels along the way either.  I caught the train to Leon from Madrid, having flown in via Zurich from Birmingham (that’s another story in itself).  I stayed in fabulous accommodation (although the food in 3 establishments was somewhat dubious, and I do wonder if they know what vegetables or salad are in northern Spain as I saw so little – meat and carbs to go!) which was very welcome at the end of a day’s walking, I can tell you. 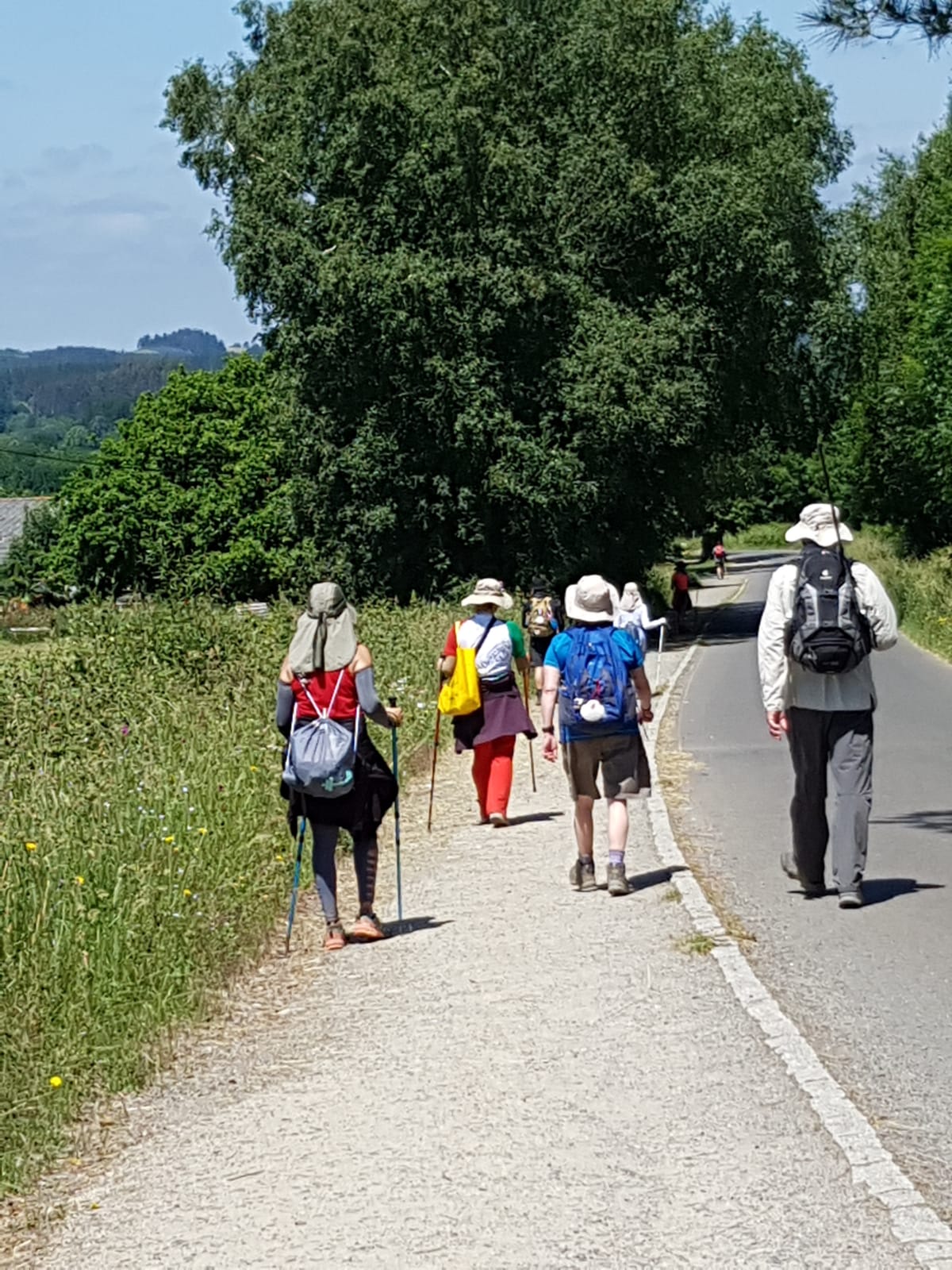 Although I had booked as a single traveller, when I arrived in Leon, I found at the morning welcome with the local tour guide that there were 3 other people who had booked the same trip. We would be walking 14 -23 kilometres per day and for an average of 4 to 5 hours across varying terrain.  I really ought to have read the itinerary more clearly – eek! I’d done a bit of walking before, but nothing on this scale – hey ho, I was there and good to go!

It was in the early stages of the holiday that I realised that I needed to surrender and go with the flow of walking with the group, or push against it to do my own thing and go solo (as I’d originally planned to do), which given the circumstances and dynamics of the small group would have made things seen awkward.  That was my opinion anyway, as it seemed to work with us all walking together.  By listening to my instinct and intuition, I decided to fall in with the others. We essentially walked and talked and ate together for 9 days.  On the whole, we stayed at the same accommodation, which varied greatly depending upon where we were along The Way – from a converted rectory and a converted manor house to more basic accommodation (more akin to a hostel), and in one place, a dining room full of American teenagers causing mayhem (creating a lot of volume and mess, just being typical teens).  Sitting and drinking cold beer after hours in the heat (which was most days around 30 degrees) carrying a backpack and looking over the water chatting the two Australian guys I’d been walking with was just great though … and boy, were we ready to stop at the end of each day!

So, there we were, 2 retired guys from Oz (Las and Dieter), me and Julie, a woman of my age, from Cambridge all walking together and rubbing along.  There was also some chafing of the feet too!

My vision of walking alone and only talking to people I met as I walked in passing, and not drinking alcohol never materialised, and I have to say I drank far more than I usually do, but I wasn’t affected in the slightest.  Very odd indeed.

As I write this, I realise that my walk evolved (minus the arguments) into walking with the same group in much the same way as ‘The Way’ staring Martin Sheen.  Watch it if you haven’t as it’s a fab film.

And that is what walking The Camino is all about.  It’s a journey, and for everyone who walks it, the experience will be very different based on our expectations and our life to date.

I expected to walk it alone, as I expect did Julie. Las and Dieter (old friends from way back when) both expected to walk it together and not with two mad women from the UK! Our expectations of the walk / accommodation were different too.  We supported and encouraged each other, gave each other space when it was needed and generally had a great time albeit exhausting at times.

I had booked the trip in haste, and didn’t really pay much attention to what it would involve, which for me on day one meant tears of pain and frustration as I have some problems with my knees when going downhill for long periods of time.  I hadn’t realised that the first part of the walk would involve descending around 1000 metres … I genuinely didn’t think that I would make it to the bottom.  Julie supported me and fed me painkillers and we had wine at the end.  I’m sure she encouraged my wine consumption now I come to think of it!  That same day, the guys walked off ahead of us and took a wrong turn, but we did all eventually manage to reach the first port of call having been transferred from Leon to Cruz de Ferro, the highest point on the Camino, and walked on to Molinaseca … where we had wine!

Every day was different from the day before as we progressed across northern Spain.  The terrain varied widely from that steep drop to a similar climb the following day. Oh, the views!  We would go for miles seeing no-one and then suddenly there were people everywhere, from a German lad in his early 20s at a guess, walking with his top off and balancing (with assistance from one hand) his backpack on his head, to people running, mountain biking and even one person on low level 3-wheeler racing bike.  We even met a woman who had gained a bit of a reputation before we met her – she started her walk in Sheffield, walked to the south coast of the UK, caught the ferry across the Channel and walked on to the starting point at St Jean Pied de Port in France. The Camino portion is nearly 800km (500 miles) alone!

I don’t know how she did it – my feet and ankles hurt so much at times and I know that there were one or two days when we were all totally wiped out due to the heat.  We didn’t start walking most days until around 9:30am, which meant we were quickly walking into the heat.  Those who were doing their own thing and stopping in hostels were up before sunrise and covering a lot of ground before the intensity of the heat kicked in.  And this wasn’t even peak season!

By surrendering and going with the flow, I was working with the energies around me rather than against them and in doing so, I felt supported in a way that I wouldn’t have done had I been walking alone.  It’s all too easy to rant and rave and get frustrated when things aren’t as we anticipate or expect them to be. However, they are as they are meant to be.  In the acceptance and adaptation of change, we can grow and relax into our surroundings and enjoy the experience we are having in the present moment.

So the next time you find things aren’t as you thought they would be, relax into the situation you find yourself in, and go with the flow rather than fight it – you’ll have an altogether more enjoyable time. 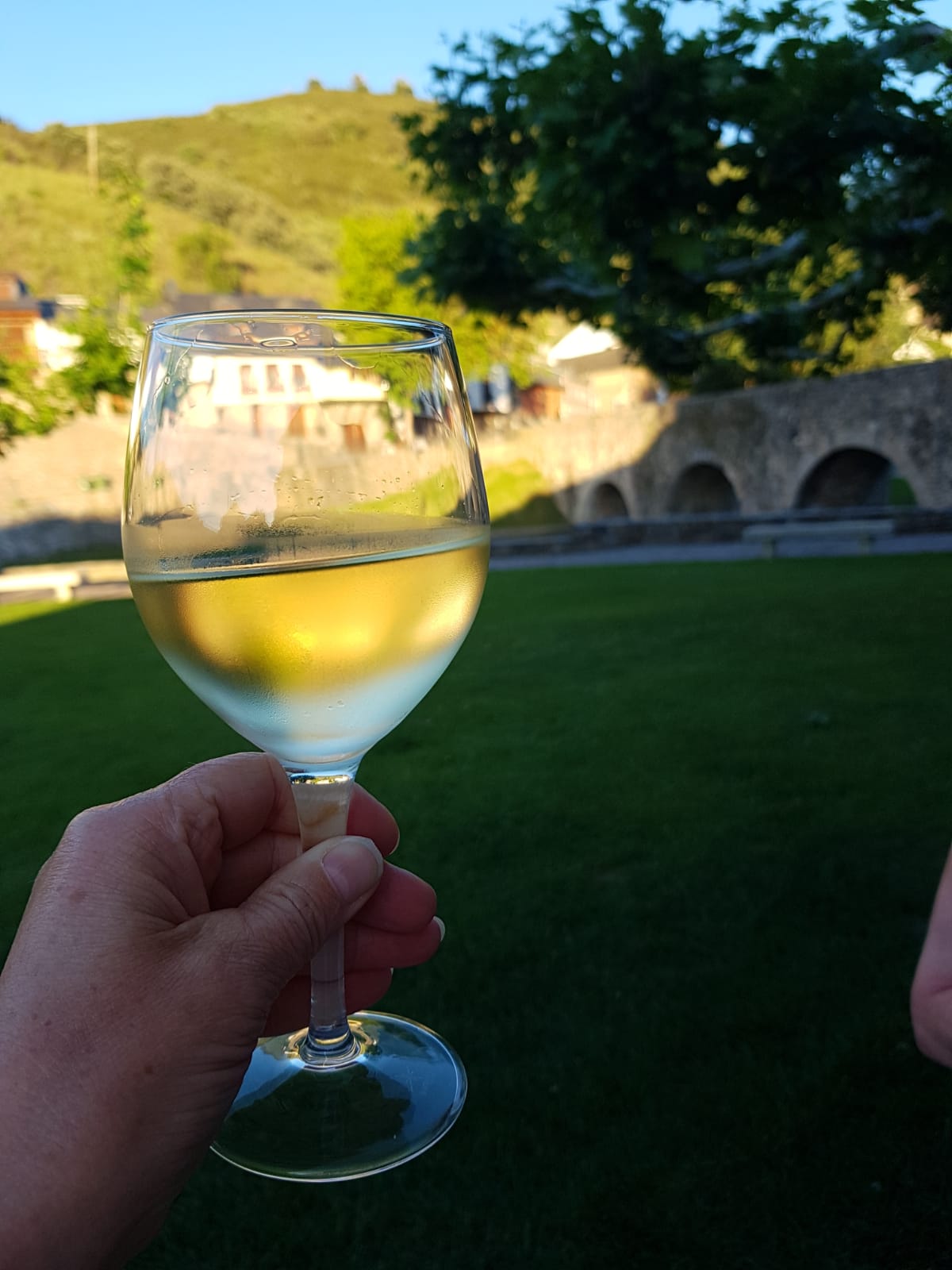