I DON’T EVER want to feel like that AGAIN!! 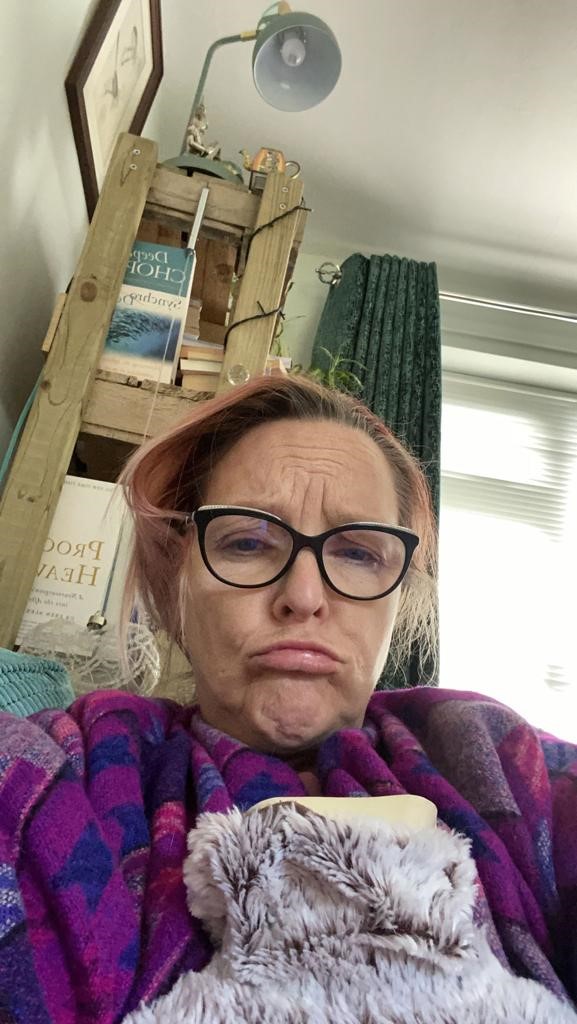 I DON’T EVER want to feel like that AGAIN!!

Holy moly!  That is a complete understatement…

Let me explain and I’ll aim to keep it brief!

It all started at the beginning of the last full week of January, when I began to get some abdominal pain that felt like trapped wind.  As such, I thought nothing much about it initially. It was uncomfortable but I figured it would pass (as wind tends to!)

On the Tuesday night, Gareth and I went to the cinema to see Superman.  No popcorn, no sweets or fizzy pop were purchased or consumed, and the film was great, in case you’re interested!

By the time I returned home, I was figured a trip to the loo would ease the pain that was still there.  Not so.

Wednesday arrived and the day progressed with a few gurgles and then, after one of my coaching clients had left the house, I felt a mad dash to the loo come on. Sorry, TMI, but I thought this would bring an end to the discomfort.

In fact, that was when things took a turn for the worse.  I started to get the shivers and shakes, and nausea crept in too.

I hurried to the sofa, dragged 3 blankets around me but could not get warm.  Gareth was instructed on his way back from a training (running) session to bring tonic water and settlers to see if that would help.

In short, no.  A hot water bottle brought a bit of relief, as did sitting wedged into the sofa.

However, I struggled to concentrate on anything other than just handling the pain, and even though I had thoughts running through my mind to jot things down, I just didn’t have the capacity to do so.

And this is not me.  On the rare occasions I feel unwell or a bit rough, I tend to push through and get on with stuff.  This was the start of something so very different.  I’ve never known anything so debilitating before.

That night, I dragged myself to bed only to be woken by the pain, which then saw me return to the sofa, and eventually fall back to sleep. At 7am and 8am, Gareth came to see how I was before going to work and in my dazed and dozy state, I figured I’d get up and shower before my Office Manager Lou arrived.  That didn’t happen.  When she arrived, she found me comatose on the sofa wrapped up and looking totally crap.

Nothing fazes Lou; however, she has not seen me that ill in all the years she has worked for me and known me, and those years are now very many!

I shook myself into shape, grabbed a shower, had breakfast, and managed 2 hours of work before another massive wave of abdominal pain swept over me and the shivers and shakes returned.  Lou had nipped out of the office when this happened and when she returned, there I was back on the sofa in a right state.

I forgot to mention that during the preceding days and whilst Lou was out, I’d also been reduced to uncontrollable tears of pain, anxiety, and an inability to breathe properly.  Not. Like. Me. One. Bit!

With that, it was decided that we should call 911, only they were too busy and recommended calling the local surgery, where it is notoriously hard to get an appointment. However, I did call, and waited in call position 2 for around 10-15 minutes, got through and eventually had a call back from the doctor.  Within half an hour, I was in his surgery and within another hour, Gareth had driven me to the Queens Medical Centre for tests.

Bloods and urine samples were taken, along with temperature, blood pressure, and checks for Covid.

I was then sent home and asked to return on Friday morning for an ultrasound.

They thought I might have a gallbladder or kidney issue as I wasn’t presenting typically for a UTI (urinary tract infection).

Before progressing further, I need to give the NHS a massive shout-out for the speed of processing me through the system. At the time, it felt like forever, but on reflection, I had been taken care of so very quickly.  The nurses’ humour made me laugh, one of them had a beautiful singing voice and I had a couple of lovely chats whilst being looked after by two of the doctors.

They are all doing an amazing job!

So, to the next few days of pain.

In short, it was awful, and I felt dreadful all of Friday and Saturday – day and night.  Unable to do anything other than stay on the sofa, I watched 3 films back-to-back – Sherman and Mr Peabody, The Invisible Man, and The Gentlemen.  One extreme to the other, but it got me through.

Poor nurse Gareth though – he had a VERY grumpy, impatient patient.

By Sunday, thankfully, I started to feel marginally better and on Monday, I managed a few hours of work before realising that it wasn’t a good idea to do too much.  Today, as I am writing this post, I have managed a gentle full day.

So, what have I learned?

Well, this has been an interesting one for reflection and learning, that is for sure.  I wanted, as previously noted, to jot down my thoughts but was so incapacitated that I couldn’t / didn’t and as such, I was looking forward to regaining that space in my head where I could actually sit and think clearly.

I have been knocked completely sideways on all levels.  My energy has dissipated completely.  For someone who operates at over 100% most of the time, to be reduced to 5-10% was a BIG shock.  And something I have no intention of repeating.

There are times, however, when you get caught in the eye of the storm and you miss the point, as you’re in so deep.  As a person who can do lots of stuff at the same time, I have continuously layered stuff upon myself.

Enough though. My body has already told me to rein stuff in, first with shin splints and now a mysterious UTI which I can only imagine has been brought on by the chain that holds me to my desk with that ‘I’ll just finish this first’ which ultimately responded with ‘I really ought not to leave it so long’!

My plans are to radically reduce my time on social media; I really don’t need to post here, there, and everywhere – it’s far too EXHAUSTING just thinking about it all to be honest, and now it is time to be firm, really firm, and only do the stuff that feels in flow and, to be brutally honest, easy!

I’ve also been unsubscribing and deleting unwanted and unnecessary stuff like crazy! And it feels good!

It’s just the start, but it’s a good start to clear the decks and free my time to create more time to do the things that I love doing, which include:

I want to stay healthy for many years to come, and I have so much that I still want to do – this has been an early warning sign, and I have taken notice.

As a final note, it is SO very important to listen to our bodies, to take note, to make the changes to our lifestyle that enable us to live healthier and happier lives.  I love doing stuff – it just happens to have become an overdone strength that needed reining in.